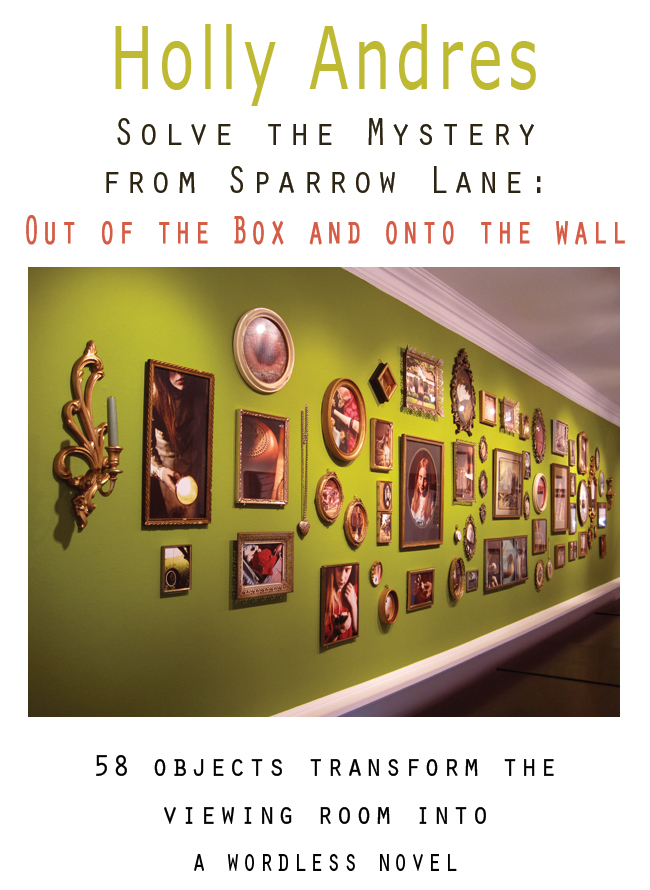 Two days ago, inside two boxes, 58 objects arrived at Jackson Fine Art. In the viewing room for three weeks, these curious objects have transformed the gallery wall into a mysterious wordless novel. With 6 days before, Halloween don't miss this opportunity to escape into the haunting story of THE TRAIL OF SPARROW LANE - a collection of small-scale, intimate images, intended to represent the adolescent's psychological trail. Holly Andres uses uniquely framed photographs and objects to ponder the complexities of childhood, the fleeting nature of memory, and introspection. Typically her images rely on a tension between an apparently approachable subject matter and a darker, sometimes chilling subtext. SPARROW LANE presents an elliptical narrative of young women on the verge of adulthood. Drawing on the formal and thematic conventions of Nancy Drew books, 1970s horror films and Alfred Hitchcock, the series depicts girls in search of forbidden knowledge. By employing suggestive and symbolic iconography such as chrome flashlights, skeleton keys, mirrors, birdcages and open drawers, literal narratives are suspended to suggest psycho-sexual metaphors. The Sparrow Lane protagonists are propelled by curiosity, empowered by their discoveries, and are also intimidated by a sense of impending threat. While the girls flirt with danger, however, the work is apparently innocent and devoid of explicit violence. Rather, the series represents the potential loss of innocence. The installation, pictured here, titled THE TRAIL OF SPARROW LANE accompanies Holly Andres' larger series SPARROW LANE seen on our website. Come by the gallery, follow the clues, and solve the mystery. Contact anna@jacksonfineart.com or call 404.233.3739 for more information.