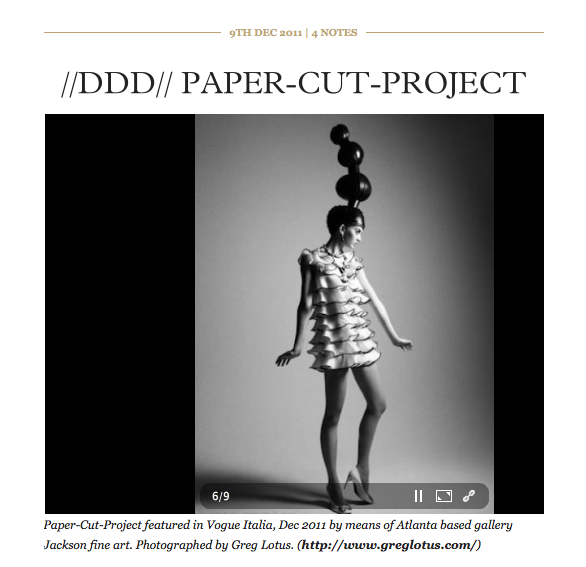 The Dirty Dirty Diary Reviews Paper-Cut-Project Written by Maggie Beniot, Production Coordinator, The DDD Flip through the pages of December’s Vogue Italia, Jen Kao’s S/S 2012 collection, Kate Spade New York’s store front window, and you will encounter the beautiful craftsmanship of design duo Amy Flurry and Nikki Salk of the paper-cut-project. In terms of having both a voice and a vision, its not often one comes across artistry of this caliber. paper-cut-project brings a whole new meaning to the possibilities of paper, the weight (pun intended) that it holds. These handcrafted sculptures, by no means dull, are the manifestations of a ceaselessly prolific mind - a mind that haunts, and agitates, and catapults my sight to a realm of thought. The ability of the paper-cut team to engender such reaction, by means of vision, communicates a narrative far more powerful than paper and glue can achieve alone. I see shapes that are otherworldly. I am captivated. Ideas drive this vision and the paper has a voice - a voice that is graceful, but bold. These figures elicit something. There is a sense of movement and fluidity that engulfs the architecture. But, they are representative of something far more great than finite form. Each structure is representative of a need to create. We have all felt it before. It is this thing that grips us, irritates us almost. It won’t go away until acknowledged and dealt with accordingly. The itch ignites a ball of energy in us that will not settle until it has met its match - an outlet, a creation that grants resolve. I am moved by each piece because I understand the origin of its creation. I recognize it, I have felt it, I believe in it because I understand the energy behind its use, the point of its conception, its purpose. I am led to believe that it is the why, not the what, that grips a human soul. It is the reasoning behind the paper, the intent, the conviction, the birth of an idea that is original and viscerally driven. Of course, the paper is beautiful, but it is not the paper alone that draws my attention and generates lasting impact. I like these sculptures for their aesthetic value, yes, but here the paper is representative of true emotion - a need for a creative entity to call one’s own - and thus, my draw is much more particular. So then, as heads turn and eyes focus in, the paper-cut-project seems to be grabbing attention around the globe. It seems that as the paper-cut-project builds momentum, our vision narrows, as we can’t help but gaze in anticipation. And so, the humble project now begins to generate some lasting impact, not for the paper alone, but by means of the vision that drives the art - a vision that gives precedence to the durability of both the paper-cut name and design aesthetic. I am eager to see what these ladies come up with next!